Generation Landslide is a Los Angeles-based quartet who rehearse on a side street near Venice Boulevard ‘round the corner from the high school our singer/frontman attended and was kicked out of… twice. We usually go nuts for around 55 minutes, then our guitarist and drummer cut outside to shoot the shit and smoke Pall Mall Reds. They soon mosey back in. Our singer/Wurlitzer player uses these breaks to adjust his stomp boxes while our bassist fields calls regarding Little Richard (Charles Glenn–not pictured–was Richard’s MD for decades and they remain in close contact). We bitch about how The Apple Pan isn’t open Mondays, which seems to be the only day we ever hang out.

Generation Landslide have been bandmates and friends for going on a half-decade now. We’ve been blessed enough to have recorded on stellar gear in legendary rooms flanked by well-known talented people and had the opportunity to do what our drummer calls “some real shit.” But if the four of us can’t come back to home base and be a fluid musical unit; well then all of that otherness won’t amount to much more than crass commercial posturing and overblown Hollywood hype. And Gen. Lan. has already stood silent witness to the eye-rolling emptiness of Hollywood hype. We live here.

People have told us we sound like Benjamin Booker, Queens of the Stone Age, TV On The Radio, an LA Jack White Band or a darker and more jam oriented Silversun Pickups. Usually we’ll say we’re kinda’ “Stax meets Stoner Rock”. Incidentally, we copped our name from a song by The Alice Cooper Band, which is probably misleading because we don’t dress or have an act like Alice—however, we completely identify with the light-heartedly lawless and semi-apocalyptic imagery in some of his earlier works.

Generation Landslide writes tongue-in-cheek danceable ditties about battering ex-lovers over the heads with hammers, white collar hoes, death, love, loss, divorce, adult relationships, teen pregnancy and throw in a hijra every once in a while for good measure. We are a pretty whimsical bunch—just read the lyrics and you’ll see.

For the record, the cover of our Eponymous First Album is the un-retouched mid-Wilshire skyline photographed through the LA Brea Tar Pits after a long Southern Californian winter’s rain. It is significant. Our music is supposed to depict this muddy, sooty, mucked up urban sprawl, but on those moments when we have our shit together … there is a beauty in depicting things for what they actually are, even in all their dirty, corroded glory.

We sincerely hope you enjoy the ride, 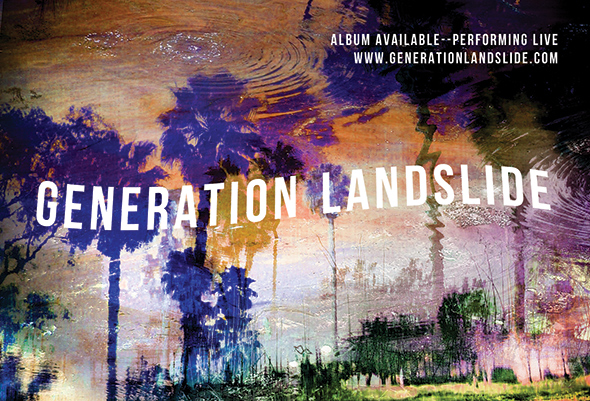